On November 17, 2018, the Dallas Chapter of ABOTA honored Lewis Sifford, its 1994 President, with the Blackie Holmes Award at its annual judicial dinner. The Dallas Chapter created the award, named after legendary Dallas lawyer James Hill “Blackie” Holmes, III, in 2014 for receipt by a member of the Dallas Chapter who best exemplifies the mission of ABOTA and who upholds the same high standards of integrity, honor and courtesy in the legal profession that Blackie did. Blackie had been the only previous recipient. On hand for the presentation was Judy Holmes, Blackie’s wife of 51 years. Lewis is a Diplomate of ABOTA and served as the National President in 2007 and President of the Texas Chapters in 1999. He has served on the Executive Committee of the Dallas Chapter for decades, attending monthly meetings and assisting with the programs sponsored by the Chapter. Lewis continues to serve on the National Executive Committee and as a Trustee of the ABOTA Foundation, is a member of the faculty of the ABOTA Trial College at Harvard Law School, and is a frequent participant in ABOTA Masters in Trials and a speaker on ethics and civility across the country. Congratulations, Lewis! 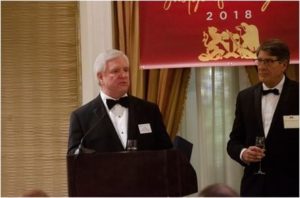