Baylor Lawyer, the Honorable Elizabeth (Peach) Ray, was recently named the 2018 recipient of the Sarah T. Hughes Women Lawyers of Achievement Award by the Women and the Law Section of the State Bar of Texas. The award ”honors the accomplishments of women who have achieved outstanding recognition in their professional area and who, by doing so, have paved the way for success for other women attorneys.” A nominee must have excelled in her field and have worked to influence other women to pursue legal careers, advance the role of women in legal positions that historically have been closed to women, or otherwise promote opportunities for women within a practice area or segment of the legal profession. 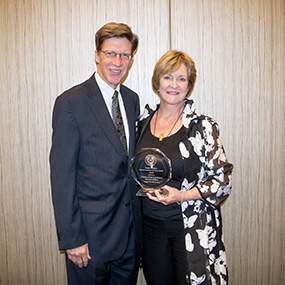 “As lawyers, we have the ethical obligation to protect and defend our system of justice. We have to stop the erosion of our judiciary and the continuous, unrelenting attack on our constitutional right to trial by jury,” stated Judge Ray upon receiving the award. “We need to empower other women; help them up, hold them up, stand shoulder-to-shoulder with them,” she added.

Judge Ray graduated with thirteen other women from Baylor Law in 1978, determined to become a civil litigator. Immediately after leaving Baylor Law, she began a clerkship with U.S. Magistrate Judge Alex McGlinchey in Fort Worth, Texas. In 1981, with a law degree and clerkship experience, she approached her father, a prominent tax litigation attorney, hoping to land an associate position with his firm. He told her, in no uncertain terms, that female attorneys “do not litigate” and encouraged her to instead focus on a different specialty.

We need to empower other women; help them up, hold them up, stand shoulder-to-shoulder with them”

–Judge Elizabeth Ray
Undeterred, Ray co-founded her own civil litigation firm, Dillard & Ray, with her former classmate and close friend, Diane Dillard. Dillard & Ray opened its doors in 1987 as one of the first female-owned law firms in Houston. In 1992, she was appointed by Governor Ann Richards to serve as the Judge for the 165th State District Court in Harris County, where, over the following seventeen years, she assembled an all-female staff. While on the bench, she was named Trial Judge of the Year by the Texas Association of Civil Trial and Appellate Specialists and served twice as the judiciary-elected Chief Administrative Judge.

“Judge Ray has been recognized as a luminary in the judiciary,” said Brad Toben, dean of Baylor Law. “She continually demonstrates true leadership by combining passion and compassion, an unwavering belief in the primacy of the law, and an uncompromising desire to empower other women in the legal profession.”

Judge Ray is currently an active member of the National Association of Women Judges, the American Board of Trial Advocates, and the Association of Women Attorneys, for whom she served on the Board of Directors from 2013 – 2014. She has an unshakeable commitment to encouraging women in the legal profession. She currently conducts complex arbitrations and mediations, and sits as a visiting judge (senior status) by assignment in the State of Texas.

The Sarah T. Hughes Women Lawyers of Achievement Award is named in recognition of Judge Hughes, who solidified her place in history as the judge who swore in Lyndon Johnson as president aboard Air Force One on November 22, 1963, after the assassination of President John F. Kenned. Long before that historic moment, she had been making headlines here in Texas. In 1935, when Hughes was appointed to the 14th State District Court and became the first woman state district judge in Texas, it was despite opposition by a state senator who issued a public statement that “Mrs. Hughes ought to be home washing dishes.”